The coronavirus pandemic has increased our collective screen time, and that’s particularly true on mobile devices. According to a new report from mobile data and analytics firm App Annie, global consumers are now spending an average of 4.2 hours per day using apps on our smartphones, an increase of 30% from just two years prior. In some markets, the average is even higher — more than five hours.

To put this in perspective in the American market, Nielsen had last year reported consumers were spending around 4 and half hours watching live or time-shifted TV, but only 3 hours, 46 minutes using smartphone apps. 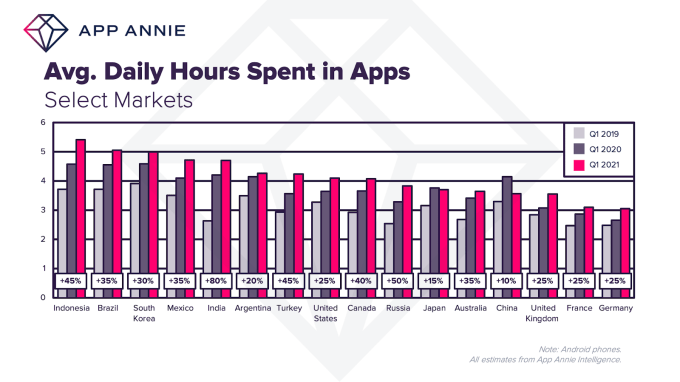 However, we should point out that Nielsen and App Annie’s analysis can’t necessarily be compared directly, because App Annie only measured time spent on Android devices — and many Americans use iPhones. Nielsen, meanwhile, relies on panels to achieve a representative sampling. Nevertheless, the broad strokes here are that mobile apps seem to be a more popular means of entertainment than the good ol’ American pastime of watching TV.

The new report also notes that three markets — Brazil, South Korea, and Indonesia — saw the average daily time spent in apps jump to over five hours this past quarter.

It can be difficult to determine which apps are driving these changes as the most downloaded apps tend to remain the same quarter after quarter. The top charts are dominated by the usual names like TikTok, YouTube and Facebook, for example. That’s why App Annie now tracks what it calls “breakout apps,” which are those that saw spikes in quarter-over-quarter downloads across both iOS and Android.

In Q1 2021, Western markets saw a sharp rise in secure messaging apps, Signal and Telegram. Signal, for instance, placed first in the U.K., Germany, and France, and fourth in the U.S. as a “breakout app” for the quarter. Telegram was No. 9 in the U.K. No. 5 in France, and No. 7 in the U.S.

Investment and trading apps were also popular in the quarter, with Coinbase’s crypto app at No. 6 in the U.S. and U.K. on this list, while Binance was No. 7 in France. Crypto trading app Upbit, meanwhile, was No. 1 in South Korea. The payment app, PayPay was the No. 1 breakout app in Japan. And Robinhood was No. 2 in the U.S.

Clubhouse also made a showing on the “breakout” charts, as it gained ground in non-U.S. markets like Germany and Japan, where it ranked No. 4 and No. 3, respectively.

China’s breakout chart was different, with a focus on video apps like TikTok, Kwai, CapCut and iQIYI.

TikTok’s influence on games was also apparent in the quarter. The game High Heels from Istanbul-based Rollic (now owned by Zynga), was heavily advertised on TikTok, sending the title to No. 1 in the U.S. and U.K.’s “breakout” games charts, as well as No. 3 in China, No. 7 in Germany, and No. 6 in Russia.

Other hyper-casual games did well, too, including Project Makeover, DOP 2: Delete One Part, and Phone Case DIY.

Crash Bandicoot: On the Run also broke out in the quarter. Despite launching on March 25, the game saw 21 million downloads in four days, becoming the top breakout app in Germany, No. 2 in the U.S., No. 3 in the U.K, and No. 9 in France.